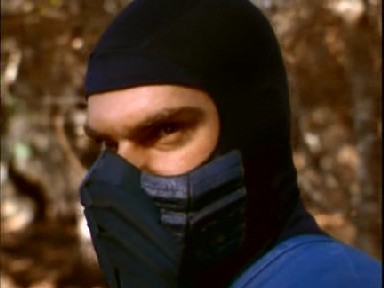 Episodes:    Cold Reality, The Serpent and the Ice

Sub-Zero was once a normal person living a happy life with his family. But when he was only a child, Sub-Zero’s family was attacked by a small band of ninjas. They stripped Sub-Zero of his family, leaving them weaping in a painful mess. The ninjas brought Sub-Zero to an unknown place, dark and terrifying. This place was the hideout of The Lin Kuei, a clan of superhuman ninjas. The clan began brainwashing Sub-Zero to make him forget about his family, and then began the training. The Lin Kuei trained him to be a fierce warrior from an early age. It was hard and agonising as he passed from being a child to a teenager to a man. When he was completed, the clan gave him the name Sub-Zero because of his uncanny ability to summon freezing energy and control it in every way he liked. This power was mainly used as a projectile weapon, resulting in his enemies falling to the ground and shattering into pieces. Sub-Zero then began working as one of the main agents for the Lin Kuei. He would fight, he would kill, and he would even die for his beloved masters.

The current location of Sub-Zero is unknown, ever since he betrayed The Lin Kuei by siding with the Earth warriors to defeat his supposed-to-be ally, Scorpion. He has no one to turn and everyone to run from. The emperor of Outworld, Shao Kahn, is also attempting to have him destroyed after Sub-Zero broke the alliance with Scorpion, an alliance which he organised to crush the Earth warriors. Even the Earth warriors themselves are not friendly with the superninja. But Sub-Zero is not to be underestimated, for his enemies forget his amazing combat skills and this could cost them dearly. Another enemy to beware of is Sub-Zero’s former companion, Smoke, who has been sent to hunt him down by The Lin Kuei. Sub-Zero is like a cornered fox, but as you know, corned fox’s are rarely classified as defenseless.

Attack:
Sub-Zero’s attacks vary widely. One minute he might be wrestling someone to the ground, the other he might be somersaulting off a balcony. Sub-Zero alters his attacks according to the current situation, and adjusts them according to his opponents. His punches are stiff, his kicks are strong, and his all-out assualts are devastating.

Defense:
Sub-Zero is not only brilliant in the attacking department. His defense skills stop incoming moves dead in their tracks. His blocks are so strong that some might recoil. His dodging is so accurate that he would know how to let a kick reach only a thread off his clothes.