Interviewed by Dreth (member of the MKC Site)

Dreth: Hello Adoni. Adoni, how was it that you came to be one of the most beloved characters in the whole MKC series? 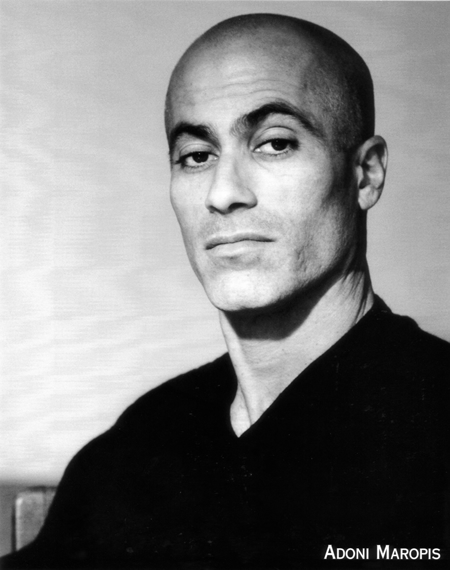 Adoni: hmmm… First of all, thank you for saying that. It was actually a challenge… from the audition process to after the first episode. I sort of had to fight to keep my character intact from the beginning. I really felt I had this character nailed at the audition, but everyone has there own ideas on what they believe will work. Regardless, I impressed them enough to be cast. And I was lucky that the director of the first Quan Chi episode let me do my thing. I honestly wasn’t into the whole Mortal Kombat video game thing, but when they first put my make-up on (a daily 2 hour process) I just felt this character. Every morning I just kept my morning voice and kept talking to people on the set with it. I would begin with a simple ‘aaaahhhh… perhaps’ Anyway, the problem came after when they wanted me to bring this guy (Quan Chi) down a bit. They said I was giving too much. So, I did, and it felt so wrong. So when they called me into ADR which is doing voice over in spots where the voice got muddled in a film or to add lines… the producer asked me which character I liked better—the first episode Quan Chi or the second. I said definitely the first and he agreed. So I had to go back and redo my voice for the second episode to match the first and try to bring a bit more of that original intensity to the part. I hope it worked but you can see a difference in the two episodes. But at least now, we knew where I was going with this guy. And from that point on, they let me be and let it all hang out. Damn, I love this character.

Dreth: Did MKC open a lot of doors for you, or were they already open, MKC being one of many?

Adoni: Well, I think just putting that on my reel is very impressive or rather shocking to people. They always are amazed to see that that character is me. It shows diversity and is one of the few times as an actor that I didn’t have to use some sort of accent. So in that sense, yes. But remember, MKC only lasted a year because it was blamed for the Columbine shootings.

Dreth: Tell us, what have you been doing after you finished Mortal Kombat Conquest in 1998?

Adoni: Well, if you check my website you will see the various movies I have done since: Scorpion King, Bad Company, The Gristle, Hidalgo, Troy, Alfie (although I had billing, my 2 scenes were cut—can see them on deleted scenes section on DVD). My greatest experience was working with Viggo Mortensen in Hidalgo though because it was such a challenge. Simply learning to ride a difficult horse and on top of that to have a falcon on my wrist. And then the filming itself. It was like I lived the part when filming out in the Moroccan desert.

Dreth: The next question is only three words long. Mortal Kombat III?

Adoni: I know they are going to film the 3rd Mortal Kombat movie and the Quan Chi character was written with me in mind. At least that is what Larry Kasanoff (exec producer from Threshold Entertainment) told me a few years ago. But, but now I’m told that Lion’s Gate who is doing the film may have other ideas for who they want to play Quan Chi. Maybe with some support from my fans…who knows.

Dreth: We’ve heard from Chris Casamassa (Scorpion) that Mortal Kombat 3 is, still, in pre-production. On the IMDB.com website, the movie still casts you as Quan Chi, and it was last updated in 2005. When did the executive producer talk to you about the movie and your role, and have they talked to you since then?

Adoni: Dreth, I spoke with Larry Kasanoff last December if I recall correctly, and I think it was just updated on IMDB.com but you never know what is truly real on there. I have not spoken to Larry since then but recently auditioned for the casting director of the first two Mortal Kombat movies and she hasn’t heard anything…

*By the way I just learned they want me for the part I auditioned for, Johnny Black Hawk, in BONE EATER, and am in negotiations.*

Dreth: Do you have any idea of what the storyline of MK: Devastation consists of?

Adoni: No…I do not… Just heard that Quan Chi was the main villain…but that was years ago…

Dreth: Regarding MKC, did you like how the final episode ‘Vengeance’ turned out?

Adoni: All I know is that I was wiped out, but then again do I ever die… ?

Dreth: Were you actually expecting to come back for a second season?

Adoni: Yes I was expecting to come back but from what I understand Mortal Kombat was blamed for the Columbine shootings at that time and regardless of the great ratings Warner didn’t want to pick it up again. I also heard rumors that a new series of sorts with Quan Chi was in the works at the time… that’s what some of the leads whispered in my ear … only rumors.

Alright Adoni, the following questions are from other MKC members.

Member Conquest from the MKC Forum asks: Did you use a stunt double in MKC, if so, who was it?

Adoni: Yes of course they had a stunt double for me… his name is Gary Ray Stearns if I recall correctly. Great guy and of course one of the elite martial artists in the world from what I recall. I must say (although I have always been very athletic and consider myself an athlete first and foremost) that at present I can do most of the stuff that was done for me back then. I practice a mix of martial arts that includes a lot of spin kicks and such. But I would never be able to do the incredible flips that Gary did. I always love having a stunt person although I love doing most of my stunts. But you spread the wealth by having one.

If he doesn’t mind telling us, was the head-bobbing he used to do as Quan Chi just part of his character, or was the costume just uncomfortable for him?

Adoni: The head-bobbing was just part of the Quan Chi flair…. I always like inflecting a tinge of humor even in the most extreme villains. I know my character may have scared a lot of people but in a sort of devious way I hope I lured them to like me at the same time.

Member Davy from the MKC Forum asks: How was it to have the beautiful Jamie Pressly, as well as the other beautiful girls, as your slaves?

Adoni: Well, when I first arrived Renee Tenison greeted me… she was so nice and beautiful and we ended up hanging out together a lot and playing basketball together…etc… nothing more. But later when her and Jaime Pressly went out to dinner with me and were talking about Playboy and all…it clicked. Renee was the first black playmate of the year in the 1980’s sometime and yes I was well… a bit crazy about her… alright I will admit it … she was my fantasy girl. And of course her identical twin sister. So when I realized that it sort of amazed me that she was now my slave. Jaimie Pressly is another story… great woman… strong personality and fun, silly, etc. Dana Hee was very nice as well, but I didn’t hang out with her much.

Member ji8483 from the MKC Forum asks: Did your costume’s spikes ever get you in trouble, like getting it snagged on something, or poking yourself or someone else with the spikes?

Adoni: Yes they sure did get in the way at times. They weren’t too secure on my costume either. My costume was fantastic. I think it would have won any Halloween Costume contest. Darn it… I miss it!

Dreth: Besides Quan Chi, what other ‘bad guys’ have you played? Were they more, or less enjoyable than the evil sorcerer?

Adoni: Honestly, Quan Chi was my favorite bad guy… I saw him as evil but in a fun way. I have played quite a few bad guys… And even if they weren’t BAD they still had something inside that had an edge…it’s just natural in me I guess… Of course I loved playing SAKR in “Hidalgo” and he appears to be bad but is just a righteous proud Arab who appears bad because he is up against Viggo Mortensen, and of course they save each other and become friends in the end.

Dreth: Have you visited the Mortal Kombat Conquest website yet?

Adoni: I believe I have… But maybe there is a different site that you are speaking of…the one you have made perhaps? I haven’t seen that one.

Dreth: I only made the wallpapers of the one I showed you, which is www.mkcsite.com.

Adoni: Thanks for the site I will check it out.

Dreth: Alright, for closing, anything you want to say to all Adoni / Quan Chi fans out there?

Adoni: Well, I hope I have some fans out there. I have gotten some mail from Quan Chi fans throughout the years… And they have been my favorite pieces of mail because for one I loved playing Quan Chi so much. But I have gotten more mail from TROY fans believe it or not even though I had a small role. So, if there are Adoni/Quan Chi fans… I hope you can write to the Mortal Kombat site or make a call and let the people (execs as well) know that you want to see Adoni as Quan Chi in the upcoming movie. And with that, I thank you for the interest you have shown in your interview of me and above all thank you and all the Quan Chi fans for simply enjoying my work.

All the best,
Adoni