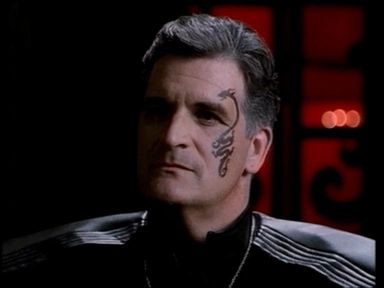 How did you get the role (as Bannak)?

I went through the usual audition process. In this case it involved a trip to Orlando where the series was being shot. I made the ‘choice’ of a peaceful and patient man who is weary of violence and corruption. That’s the kind of history you must have in mind in order to put any dimension into the character.

What do you think of your part and character in the show? Did you like your role?

I loved the role! Of course, I wished that Bannak could have had the chance to show off his martial arts skills at some point . . . not that I possess any! It would have been fun to watch a stuntperson make me look deadly!

Had you heard about Mortal Kombat movies and video games before you got the part in MKC?

I was a fan of the movies prior to landing the part. Being of a, shall we say previous    generation, I am totally uncoordinated in the world of video games!

Your character didn’t get the chance to meet Kung Lao, Siro and Taja. Did you see them and other actors behind the scenes?

I saw a few of them, briefly, behind the scenes. Unfortunately, I didn’t have the opportunity to appear in any scenes with them. I saw them in their ‘civilian’ attire. Wimps. (I’m kidding.)

Have you seen Terminator 3? What do you think of Kristanna Loken (Taja from MKC) as Terminatrix?

I haven’t yet seen T3, but Kristanna Loken has dominated several pages of the trade magazines I subscribe to. As Bannak would say, ‘Hommina, hommina!’ LOL

Do you have any MKC episodes on video/DVD?

I hadn’t the foggiest idea that any MKC episodes were available on DVD until I visited your terrific site. Now, I know where to get them. Thanks!

How does it feel to see yourself the ‘Debt of the Dragon’ episode?

Often you hear actors say that they ‘never watch themselves’ on film. I’d say there are a couple of instances where I’d rather not look at my performance, but not so with MKC. I loved watching myself emote while all dressed up in leather with that dragon tattoo on my face. I thought I was quite striking! (I’m hoping readers are catching my humor here.)

(Although it is likely to be ‘Dept to the Dragon’) what was your favourite episode?

I think you answered that question for me! By the way, only very classy and hip people spell favorite with a ‘u’!

I’m sure she could hardly keep her hands off me. But, seriously, I was playing her father; what kind of sick question is that! 🙂 All right, she helped the old Black Dragon light the fire in his furnace.

What member of the cast did you get on with most?

How old are you?

Okay. Now you’re getting me steamed. ‘I will suffer no more disrespect!’

Can I find your biography somewhere on the web?

I have a terribly out-of-date website that I haven’t been good at maintaining. It’s http://davecorey.actorsite.com.

What do you do in your spare time?

Paint, play guitar, write . . . and, I’m very involved in the politics of my unions, SAG and AFTRA.

What do you think of the Mortal Kombat Conquest Site?

It’s a fabulous site! And now, it’s infinitely better because of this interview.

What will be the next movie/series you play in?

You can see me as Agent Eames in ‘Bad Boys 2’. Other than that, there’s a big lull in my career, film-wise. I have, however, been performing in lots of theatre in the South Florida area. As a matter of fact, I recently played Macbeth in Shakespeare’s classic play. There was lots of ‘Bannak’ in that character . . . or vice versa.

Is there anything else you would like to say to the ones who read this interview?

Yeah! Make noise and bring the series back! It was an extremely hot show that was the victim of some mysterious industry politics. Just like Bannak, MKC was stabbed in the back. Hey! Why don’t your readers write an episode where Bannak comes back to life and is forced to make hot monkey-love to Kristanna Loken! Hommina, hommina! Peace. I’m out . . .