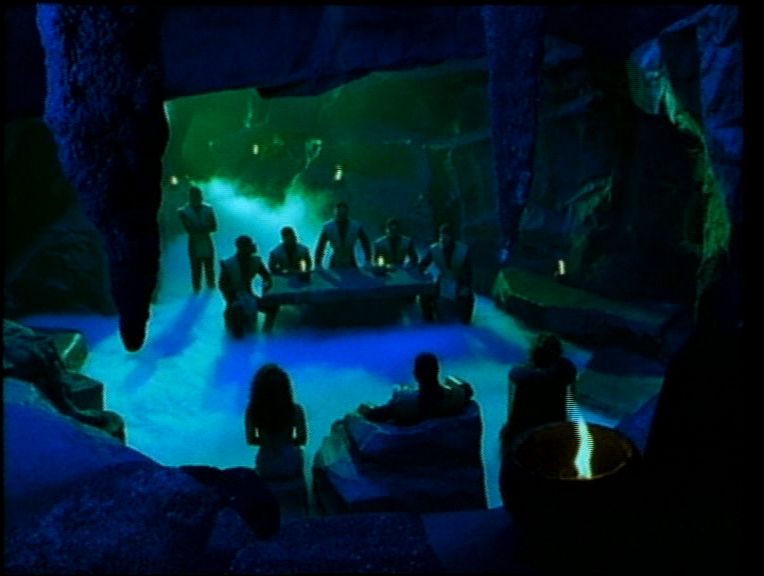 Kreeya (guest star Fabiana Udenio) is back in Earth Realm and has partnered with Reptile (guest star Jon Valera) to raise an army.

A villager comes to the trading to post trying to sell Taja (series regular Kristanna Loken) something the likes of which he’s never seen–a comb from one of Kreeya’s (guest star Fabiana Udenio) hives. Taja, however, knows exactly what it is and calls to Kung Lao and Siro (series regulars Paolo Montalban and Daniel Bernhardt) with the news that Kreeya is back in Earth Realm, most likely to raise another army. All three know that they need to move fast, as Kreeya’s offspring only need days to incubate before being born as fully grown adults, ready for battle.

Kreeya was forced to reinfiltrate Earth Realm because Shao Kahn has made the destruction of her hives throughout Outworld a top priority, weakening her empire. When Kung Lao, Taja and Siro inform Rayden (series regular Jeffrey Meek) that Kreeya has returned, he warns them that she has probably aligned herself with another of Earth Realm’s enemies and they should be doubly careful.

Kung Lao, Taja and Siro set out to destroy the hives that Kreeya has established around Zhu Zin. During the outing, Siro is attacked by a warrior guarding one of the hives. The warrior turns out to be one of Reptile’s Zaterran fighters, thus solving the mystery of Kreeya’s new partner. It’s a brutal fight, with the Zaterran fighter nearly killing Siro, until he’s rescued by Kiri and Ankha (guest stars Sung Hi Lee and Tahitia Hicks), who were last seen fighting against the Earth Realm alongside the evil Noob Saibot. Kiri and Ankha are superior fighters and make short work of the Zaterran fighter.

After Kiri and Ankha save Siro’s life, they help him to the trading post, explaining along the way that their last encounter wasn’t personal, they’re just mercenary fighters and now the money’s on keeping Earth Realm safe. Kiri and Ankha explain to Kung Lao, Siro and Taja that they all share the common goal of keeping Kreeya from taking Earth Realm, however, their loyalty is to Shao Kahn, who more than anyone, wants to thwart Kreeya’s plans–again.

Reptile’s (guest star Jon Valera) association with Kreeya hasn’t been embraced by his key warriors, who feel Kreeya is using the Zaterran race as a pawn against Shao Kahn. When one of the Zaterran warriors turns against Reptile, pledging allegiance to Shao Kahn, Reptile kills him on the spot, thus quelling any further resistance from his troops.

With Siro out of the game, Kiri and Ankha agree to help Kung Lao and Taja search for hives and destroy them with bombs that they’ve made. Taja and Kung Lao find a hive and destroy it after killing the Zaterran who was guarding it.

The news of the two fallen warriors, in a fight that’s not even his own, sends Reptile into a rage. He tells Kreeya that her plan to have Kiri and Ankha divert the attention of Kung Lao, Taja and Siro is not working and now the lethal twosome must kill the Earth Realm warriors. Meanwhile, Siro, has discovered the double-cross and sets out to warn Kung Lao.

Kiri and Ankha have transformed themselves into Zaterran reptilian warriors in order to kill Kung Lao. Just as Kiri is about to unleash the trademark Reptilian deadly acid blast on Kung Lao, Siro knocks him out of the way and the acid spray kills Ankha. Kiri escapes into the night.

With her Earth Realm invasion yet again thwarted, Kreeya convinces Reptile to abandon his people and become her mate to raise countless armies of dark warriors to unleash against the forces of good.