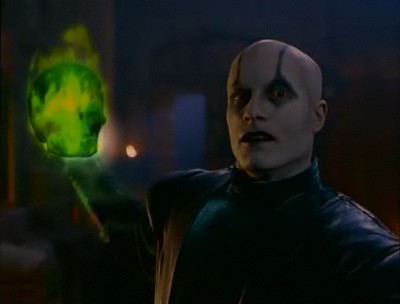 With Shang Tsung missing from the Cobalt Mines after Empress Kreeya’s attack on Outworld, Shao Kahn summons the free roaming sorcerer from Netherealm, Quan Chi to travel to the Earth Realm and capture him. Meanwhile, on the Earth Realm Shang Tsung is travelling around the forest outside the city stealing the souls of unsuspecting persons as he is trying to regain his strength after being wasted from destroying Kreeya’s hives on Earth. At the trading post, Siro returns from a lunch with a woman in a foul mood telling Taja that even after one a short time this woman was trying to change him. He tells her that the next woman he goes out with will have to be someone more like Taja, and there is an awkward pause.

Kung Lao is concerned about the recent deaths around the city and begins looking for a pattern in the killing. Upon realising that Shang Tsung is heading towards them, they decide to go out and find him first when Raiden appears telling them that Kung Lao cannot fight Shang Tsung to which Kung Lao objects saying that as Shang Tsung no longer serves Shao Kahn he is able to fight him. Raiden is confused and says that he will have to check but advises against it, Kung Lao says to hell with the rules and goes off. In Shao Kahn’s throne room, Quan Chi makes an appearance upsetting Kahn. Quan Chi tells him that the job is being done and he has come to speak of the war between Kahn and Kreeya.

During their discussion, Quan Chi suggests to the Emperor that the two form an alliance to destroy all enemies of the realm. At Shang Tsung’s camp, Quan Chi’s assassins show up and battle the sorcerer, it is during this fight Mika has some ribs broken by the sorcerer, and just as Tsung looks like he is about to lose, he fires fireballs at the trio sending them away and realises that Kahn has a new sorcerer. A few hours later Siro and Taja show up where Taja sets off a trap sending a spiked log swinging towards her. Siro saves her by jumping at her and pushing her out of the way before there is another awkward pause between the two. Back at the trading post Kung Lao is trying to solve the mystery when Siro and Taja walk in. He tells them that he has worked out that the killings are in a circle around the city and that Tsung is moving in closer, but Siro and Taja aren’t interested in what Lao has to say and the two end up spending the night together.

In the morning, Lao discovers the two in Jen’s bed and returns downstairs trying to recover from what he just saw. In the room, Siro unmorphs to reveal that he is actually Quan Chi while Taja is actually Mika, it was all a plan to get Tsung to come to them and it is working.

Meanwhile the real Siro and Taja, who are chained up in Chi’s prison set about aggravating Siann to the point of forcing her to fight them. They free themselves in the process and knock out Siann before escaping back to Zhu Zin. While this is happening, Sora appears in Kahn’s throne room to offer herself to the Emperor, and as the Emperor is leading her to his chamber she pulls a knife on him. Kahn takes it from her and forces her to reveal herself, which she does, revealing herself as Quan Chi. He tells him that Kreeya made a better offer; outraged at the treachery, Kahn sentences Quan Chi to an eternity in the Cobalt Mines. When he arrives, he takes out a prisoner and unmorphs to reveal that he is actually Tsung. With his plan succeeding, Tsung opens a portal and sets off to kill Lao. When he arrives at the trading post, he finds that Lao is gone having received a message from the real Taja but Quan Chi is awaiting him.

With his three assassins taken care of the two battle fiercely using skill and sorcery and just as Chi is about to kill Tsung, he is told that Kahn thinks Quan Chi is the traitor after Tsung shape shifted to threaten the Emperor’s life. Tsung then teleports back to the forest while Quan Chi travels to Kreeya’s camp to form an alliance with the Empress.