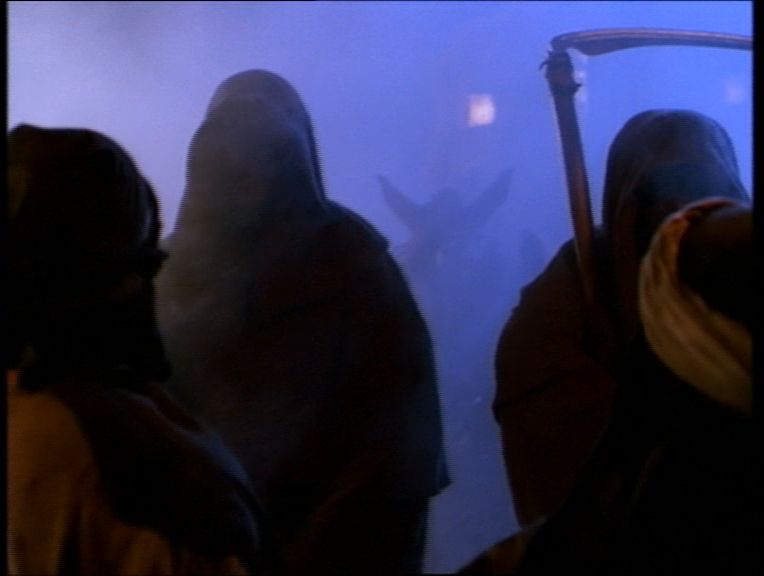 Kung Lao (series regular Paolo Montalban) has taken a friend from his past, Lori (guest star Brooke Burns) on as a martial arts student. Although Lori’s enthusiastic and hardworking, Kung Lao and Siro (series regular Daniel Bernhardt) doubt her abilities as a fighter. Lori, on the other hand, is overly confident about her ability and wants nothing more than to fight.

One day, a traveling circus of sorts arrives in Zhu Zin with the fighter Qali (guest star Roshumba Williams) as its ringleader. On the surface it appears to be just another carnival with acrobats, jugglers and costumed characters, but as Kung Lao, Taja (series regular Kristanna Loken) and Siro know, where Qali’s involved, trouble is sure to be close at hand. (The last time Qali was in Earth Realm, she betrayed Princess Kitana on behalf of Shao Kahn.)

Taja and Siro warn Qali that they’re watching her and will not tolerate any trouble. Qali claims that the festival allows her to make a living since being shunned by both Kitana and Shao Kahn–which is only partially true. She has been shunned, but the festival isn’t a living, it’s actually a means for Quan Chi to collect humans to raise an army of undead warriors!

Each night, the festival holds secret fighting contests in which the villagers compete for a chance to win money. At the end of the night, the strongest villager (and thus, the best candidate for Quan Chi’s army) faces the assassin Mika (guest star Jamie Pressly), whose stunning beauty belies her deadly skill. Once Mika has beaten the villager, Qali releases one of Quan Chi’s undead souls to take over the body.

Shang Tsung (series regular Bruce Locke) is concerned that Quan Chi is raising an army as a way to strengthen his alliance with Shao Kahn. If Shao Kahn begins to look favorably at Quan Chi, then he’ll have no use for Shang Tsung, when and if he is ever freed from the Cobalt Mines. Shang Tsung knows he must put a stop to Quan Chi and dispatches Vorpax (series regular Tracy Douglas) to Earth Realm to investigate.

Vorpax reports back to Shang Tsung and the two devise a plan. If they can get Kung Lao to fight at the festival and he is beaten, then Qali would unleash a soul to take over his body. If Shang Tsung could control the soul that’s put into Kung Lao’s body, then his value to Shao Kahn is restored.

Shang Tsung needs Qali to help him carry out his plan, so he tells her that once he’s back at Shao Kahn’s side, she will benefit–perhaps even getting Princess Kitana’s throne. She agrees to have Shang Tsung’s fighter face Kung Lao and will make the soul transference as instructed. Getting Kung Lao to fight, however, is another thing.

Lori has heard about the fighting contests and thinks she’s got what it takes. Determined to fight, Lori sneaks out to the contest. Once there, she’s taken in by Qali, who is using her as bait to get Kung Lao to the fights. It works.

When Kung Lao agrees to fight in Lori’s place, Qali presents Shang Tsung’s fighter–a giant of a man who looks as if he’ll crush Kung Lao. It’s a fierce battle, but Kung Lao manages to get the upper hand. As Kung Lao delivers the final crushing blow, the giant falls to ground knocking over the chest containing the undead souls of Quan Chi and creating a firestorm of unworldly pandemonium. Kung Lao, Taja and Siro literally run for their lives, leaving Lori behind–for she’s already joined Quan Chi’s dark legions.