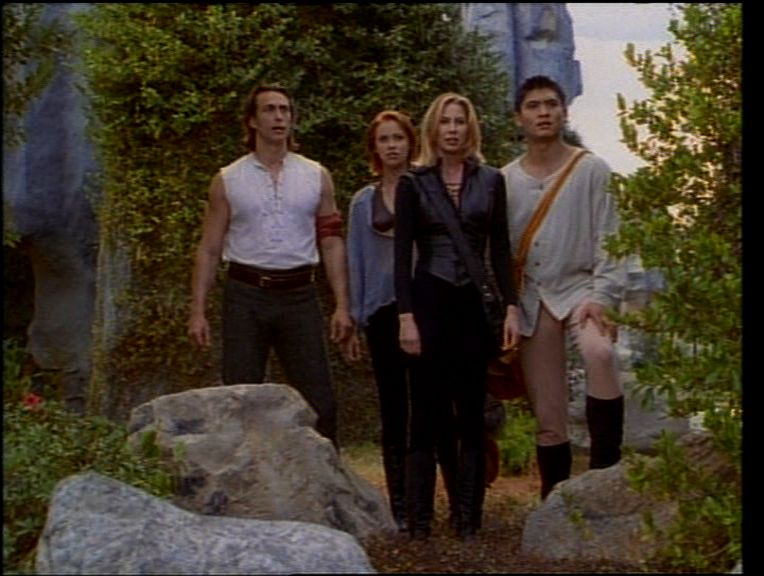 It begins in a city where the priests are beginning to make a sacrifice to their God, Shakka. They are preparing for their holy week and are sacrificing a woman in his name as they prepare to welcome his return. At the temple, Kung Lao is meditating when he is haunted by visions of Earth realm’s annihilation.

That night at the trading post, a thief breaks in and is about to make off with some jewellery when Siro discovers her. Siro is holding her against the wall, as he is about to punish her, Taja walks in and recognises the thief as an old friend, Dion, from her life as a thief. At the tavern, Kung Lao discovers Raiden trying to get drunk with a beautiful lady sitting on his knees. Raiden warns Kung Lao of the impending danger with a crazed emperor seeking revenge and says that he is just getting a little R&R.

While Dion is stealing at the market, much to Taja’s disapproval, a masked warrior who is after what was stolen from his people attacks the trading post. The warrior is killed and upon removing his mask Siro and Kung Lao notices a skull tattoo on the warrior’s forehead. They begin to grow very suspicious of Dion. That night as Lao recovers from the fight, he receives another second vision depicting the annihilation of Earth Realm. Outside in the courtyard, Taja catches Dion studying the dagger that the warrior had been after and tells her the two are travelling to the city to return it. Dion protests but Taja says they are going and that’s that. Dion tells her that she will need help to get in, and so Kung Lao and Siro decide to accompany them.

Arriving at the entrance of the city, Shakka’s guard, a cat woman, attacks them and a fight begins in which Siro has his arms slashed by her claws. Maybe realising that these warriors are too much, the guard retreats allowing them to enter the city, however unknown to them once they enter the entrance is sealed.

Inside the city, Dion returns the dagger when a high priest appears and confronts them. He informs them that their presence was foretold and he explains to the warriors about their city and the God, Shakka, who is said to be coming back tonight. Walking around, Kung Lao watch as children are play fighting and overhears the winner telling the other child to give him his soul which frightens Lao. Upon seeing the shawl that Dion obtained from the city, everything seems to make sense. The six-armed centaur on the shawl is like the ones he has seen in his visions before, the skull on the warrior’s head, the children fighting; Shakka is Shao Kahn! Racing to the entrance, they see that it has closed over.

Returning to the city centre, they see the High Priest standing on an alter and placing a dagger in the skull’s mouth he turns it, opening a massive portal. Three shadow priests enter the realm asking if they are here? Dion stands up and says they are, revealing herself as a traitor before travelling through the portal to Outworld, as the Earth Warriors are placed in captivity. Later that evening Raiden realises that something is very wrong and teleports. As the shadow priests return that evening, a voice announces that the people’s salvation awaits; only one sacrifice remains.

The three priests merge into one and attack Kung Lao. Lao is no match and just as he is about to be killed, a bolt of lightning kills the priest. Sensing the danger, Dion wants to go to Outworld, so removing the dagger from the lock the priest stabs Dion and takes her body through the portal, thus keeping the portal open indefinitely. Raiden tells the Earth Warriors to run like hell before frightening off the Shakkans with a fury of lightning strikes. Walking over to the portal he calls out Kahn, and after Raiden unleashes a fury of lightning, Kahn appears and says Raiden will bow to him.