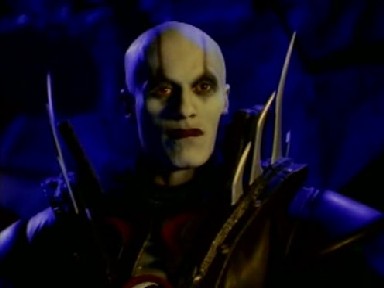 Quan Chi’s origin lies in a world unlike all others. This world is known as Netherealm, a place that is so wasted and evil it is only foul spirits, wretched warriors and dead souls who live there. Quan Chi is a sorcerer, one of mighty power and ability. He is very fond of money and valuables, and will go far to achieve such gifts. His main tactic of earning money is to destroy strong and brave warriors of all realms, and sell their souls to people of much higher rank and power. This is what led him to resurrect three unique corpses – Siann, Sora and Mika. These three female assassins where brought back to life for one purpose only, and that is to kill. Quan Chi used them for many years, having them kill warriors and collect souls. But when he came to Earth’s champion fighter Kung Lao and his friends Siro and Taja, the three walking carcasses failed in defeating them miserably. Even after poisoning them with a potion that manipulated their will, Quan Chi still failed to kill them and claim their souls. But that experience is something Quan Chi will never forget.

Quan Chi is now recovering in his hideout, somewhere deep in the forest. His three assassins obey his every command, but sometimes they can be stubborn and may back answer him. This type of behaviour infuriates Quan Chi, and may lead him to cause severe pain on that particular warrior. After Shang Tsung betraying him, he is fueled with rage and is very dangerous. Quan Chi is also hunted down by the emperor or Outworld, Shao Kahn, after Tsung tricked the emperor into believing Chi attempted to kill him. The longer Quan Chi stays idle, the more powerful he becomes. He is already noticeably stronger and more powerful than his enemy sorcerer Shang Tsung, and he is rapidly building an army of undead warriors. It’s only a matter of time before his enemies’ underestimation of him becomes the final thing they’ll live to regret.

Attack:
Quan Chi’s attack power depends on how long he waits before he makes a move. If he is looking to land a strong blow, he will go on the defensive side and wait for the perfect opening. On the other hand, he may want to deliver several weaker blows in succession. His attack can work flawlessly either way. His fighting style is based more on wild swinging moves, and seemingly (and I mean seemingly) careless attacks. But he uses these to a great advantage and can fling his limbs in the exact method necessary.

Defense:
Quan Chi isn’t very fond of standard blocking. He prefers to evade his opponent’s attacks by ducking, dodging, rolling etc. It’s better this way because his blocks don’t look very effective. To be honest, if it weren’t for his beautifully timed evasions, Quan Chi wouldn’t be very much of a contender.