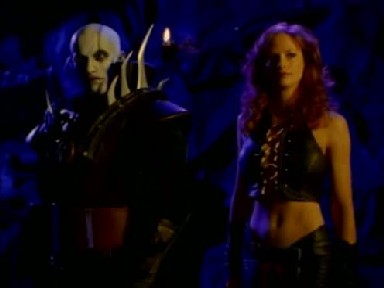 Kung Lao (series regular Paolo Montalban) is once again being plagued by visions of his own defeat–visions that Rayden (series regular Jeffrey Meek) tells him can only affect him when he’s filled with self-doubt and uncertainty. Kung Lao is feeling the pressure of being the victor of Mortal Kombat and is becoming resentful of the sacrifices he’s had to make because of it.

In an elaborate and ambitious attempt on Kung Lao’s life, Shang Tsung (series regular Bruce Locke) engineers an uneasy partnership with the evil sorcerer Quan Chi (guest star Adoni Maropis). While both are powerful in their own right, this alliance, in theory, could make them unstoppable.

With Kung Lao in his weakened and vulnerable state, Shang Tsung has Quan Chi lure him away from the Earth Realm into a parallel realm that contains everything his heart desires, including his simple pre-Mortal Kombat life and his beloved Jen. As is most often the case with Shang Tsung, there’s more, much more, than meets the eye.

The ‘parallel realm’ that Kung Lao has been lured to does indeed have everything he’s been longing for–in fact, whatever he desires appears before him. What Kung Lao doesn’t know is that this isn’t a parallel realm at all, but a 24-hour illusion being maintained by Shang Tsung. When the 24 hours has passed, Kung Lao will become Shang Tsung’s prisoner for eternity, which would leave the Earth Realm without a defender in Mortal Kombat and could ultimately free Shang Tsung from the Cobalt Mines to return to his destructive ways.

The plan is proceeding without a hitch, until Shang Tsung double-crosses Quan Chi. Originally Shang Tsung had agreed to share the secret for drawing the life force out of one’s victims and harnessing that power for one’s own gain (in exchange for Quan Chi luring Kung Lao away from the Earth Realm). Once Quan Chi had this knowledge, however, he would become much more of a challenge to Shang Tsung, so Shang Tsung reneged on his deal.

As one good double-cross deserves another, Quan Chi goes to the trading post and tells Taja (series regular Kristanna Loken) and Siro (series regular Daniel Bernhardt) exactly what’s going on and what they can do to stop it. While they’re reluctant to believe him at first, they realize that if Quan Chi has come to them in an effort to foil Shang Tsung, there must be serious trouble.

Quan Chi transports Taja and Siro to the ‘parallel realm’ and they’re able to see that it is an illusion and one that’s fading fast. Kung Lao, on the other hand, isn’t as easy to convince–it’s not until Siro drives a dagger into Jen and nothing happens, nothing at all–that he’s able to see he’s being manipulated by the forces of evil. With only seconds to spare, Kung Lao, Taja and Siro make it through the portal back to the Earth Realm, once again scrapping Shang Tsung’s plans.