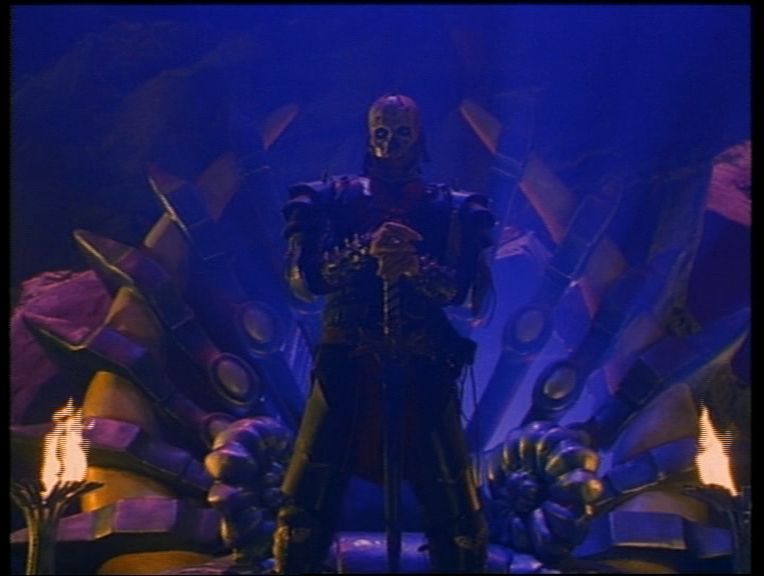 The search for Shao Kahn’s traitor is heating up with a General of his army being interrogated to the point of torture by a shadow priest. Kahn enters accompanied by Reiko and forces him to confess even though he has no idea of what the charges are. Reiko argues with the treatment saying that he has fought alongside this man countless times and that he can not be the traitor, Kahn tells Reiko that nothing is certain, and not even Reiko can be trusted before fatally stabbing the tortured general with his sword. The torture room of Kahn’s palace and an Edenian warrior who is one of Kitana’s guards is being questioned regarding the claims of treachery.

After the shadow priest makes a threat against the man’s life, he breaks free and challenges the priest to a fight. Fast and furious, the warrior is no match for the priest as the hot coals burn his face before his body is kicked into a chair that has a blade protruding from it from earlier in the fight, he has died his noble death. At Kreeya’s camp Vorpax confronts the Empress about the recent number of deaths in their losing war against Outworld. After Kreeya threatens her, she takes a dozen warriors to the trading post to strike an agreement with the Earth Warriors. Her request is quite simple; kill Kreeya. She tells them that once this is done, her race will leave for their home world and not return. Siro and Taja immediately agree, and after much deliberation so does Kung Lao. In Shao Kahn’s throne room, a shadow priest meets with Kahn saying that the search for a traitor is a waste, and so by killing another shadow priest with Kahn’s sword, the priest creates a link that will allow Kahn to actually hear the traitor confess his treachery so that no more lives will be wasted. Kahn orders each of his servants to bow down and swear allegiance to him, Reiko does so, as does Reptile, however with a certain amount of trepidation. At the trading post Vorpax and Kung Lao enact their plan, fooling Kreeya.

Thinking that Kung Lao is alone and in a weakened state, Kreeya enters only to be confronted by the three earth warriors. As Vorpax and her warriors slam the door closed behind her, trapping her inside, a fight erupts. It is long and fast and Kung Lao is injured in the process. After Siro delivers the blow that levels her, Vorpax enters plunging a sword into her empresses’ back. This seems to set off some strange reaction as something is happening to Vorpax. At Kreeya’s camp, Taja watches as Vorpax receives the Empresses’ powers and assumes the position of queen.

As Taja returns to the trading post to warn Kung Lao, Vorpax searches for Shang Tsung and chooses him as her mate. Tsung agrees to it, but only if Kung Lao is killed. Taja informs Siro and Kung Lao on the latest turn of events and together with Siro, she goes off in search of the hives. After discovering that Reptile and Reiko are not the traitors, Kahn departs his throne room leaving his sword leaning against his throne under the close watch of his guards. Making the most of the opportunity, Kiri appears from spying on the emperor and steals the sword, allowing Reptile to confront Vorpax on the control of the Earth Realm. Once he sees that Vorpax has chosen Tsung, a fight erupts. It is a brutal fight that Tsung wins, but only just. Once he had discovered his sword he had been stolen, Kahn became furious, vowing that he will have his revenge.