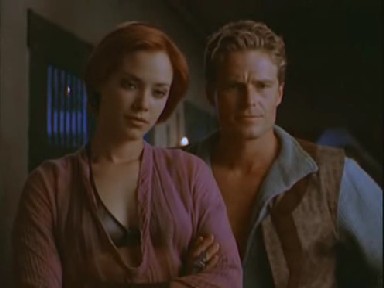 A traveler, Tomas (guest star Alex Walters), arrives in Zhu Zin and tells Kung Lao (series regular Paolo Montalban) and Taja (series regular Kristanna Loken) that he wants to join their cause defending Earth Realm. He tells them that he was supposed to compete in the Mortal Kombat tournament which Kung Lao won, but he was trapped in his village by an avalanche.

When Siro (series regular Daniel Bernhardt) returns to the post and meets Tomas he is immediately skeptical–and a bit threatened. When Siro challenges Tomas to a ‘training match,’ Tomas ends up being the better fighter and actually hurting Siro. Siro’s not the only one Tomas is having an effect on–Taja is seriously falling for the guy.

Around the same time Tomas arrived in Zhu Zin, a barmaid at the tavern (who Siro had feelings for) was murdered. A few days later a second barmaid was also killed. Kung Lao and Siro set out to investigate the murders and avenge their friends’ deaths. The only evidence they find at the crime scene is a man’s bracelet. When they take it back to the trading post, Taja reveals it is very similar to one she had bought for Tomas the day before. When Kung Lao and Siro ask to see Tomas’ bracelet he cannot find it.

The ‘evidence’ against Tomas grows: Siro saw him washing up in the courtyard late the night of the second murder and he has scratches on his chest (as though he had struggled with woman) that he can’t explain. Tomas swears he’s being framed and sets out to clear his name.

Kung Lao, in a quandary, seeks counsel from Rayden (series regular Jeffrey Meek). Rayden tells Kung Lao that as a fighter he must follow his instincts about Tomas.

Traveling outside the city, Tomas hears a woman being attacked and rushes to her aid. It turns out the ‘victim’ is Vorpax (series regular Tracy Douglas) setting a cleverly designed trap to make it appear as though Tomas was attacking her. When he goes to help her, her ‘attacker’ disappears, Vorpax tears her own clothing and starts screaming that she’s being attacked. When a crowd of villagers appears, Vorpax tells them of Tomas’ attack and suggests that he’s also responsible for the murder of the two barmaids.

Following the incident in the woods, a group of villagers returns Tomas to the trading post and demands justice. Kung Lao says that he will take responsibility for Tomas.

Back in OutWorld, Shao Kahn is quite pleased that Vorpax’s plan has gone so well. It turns out that Tomas is, in fact, who he says he is and if he joined forces with Kung Lao, they could present a formidable front against Shao Kahn–hence Tomas must be destroyed by turning Kung Lao against him. Tomas continues to defend his innocence and when Kung Lao and Siro will not change their minds, Tomas says he’s leaving. Kung Lao tells him he cannot leave as he’s under house arrest–and this begins a brutal fight. Taja is able to interrupt the fight just as the two warriors are about to kill each other.

His plan temporarily foiled, Shao Kahn sends in the warrior/creature, Reptile, to finish them off. Just as Reptile sprays a shower of deadly acid toward Kung Lao, Siro and Taja, Tomas jumps in front of them to take the hit. Tomas is killed instantly and Reptile disappears back to OutWorld, his job done.