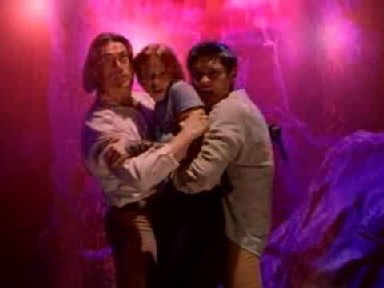 Episode opens with Taja (series regular Kristanna Loken) being followed by a mysterious hooded figure. When she catches a glimpse of her pursuer, she thinks it’s her father, from whom she’d been separated years ago (she tells everyone she’s an orphan, we learn she many have been abandoned). He then flees and she follows him into an alley where he grabs her and pulls her through a portal into the Cobalt Mines of Shokan. She is squarely deposited at the feet of Shang Tsung (series regular Bruce Locke) and Vorpax (series regular Tracy Douglas). Throughout her ordeal in the Mines, Taja is alternately befriended and betrayed by Vorpax.

The following day, Shang Tsung sends a vision to Kung Lao (series regular Paolo Montalban) telling him that Taja has been taken prisoner and he must come to Outworld to free her. Siro (series regular Daniel Bernhardt) also sees the vision and is determined to fight alongside Kung Lao in Outworld.

Deciding it’s the only way to save Taja’s life, Kung Lao heads for his appointment to be transported to Outworld. Siro surreptitiously follows him and when the portal appears, he leaps through it against Kung Lao’s demands. When they land in the Cobalt Mines, Shang Tsung is quite pleased–he believes his trap has worked and Kung Lao is now on his turf and will be dealt with by his minions.

Not one to walk blindly into such an obvious trap, Kung Lao has brought with him the crystal they had earlier discovered (episode 3) that allows for travel between realms. Just as Kung Lao is about to use the crystal to transport them back to the Earth Realm, Taja runs into the mines saying she must find her father–if it was in fact him who lured her to the mines and not a trick being played by Shang Tsung and Vorpax.

Shang Tsung grabs the crystal away from Kung Lao, imprisons both him and Siro and dispatches Vorpax to find Taja. When Vorpax catches Taja, she continues to taunt her–one minute saying her father is in the mines, the next saying it was all a conjuration by Shang Tsung. When Taja won’t cooperate with her double-cross, Vorpax returns Taja to Shang Tsung. Gloating, Shang Tsung prepares to present Shao Kahn with both the prisoners and the crystal.