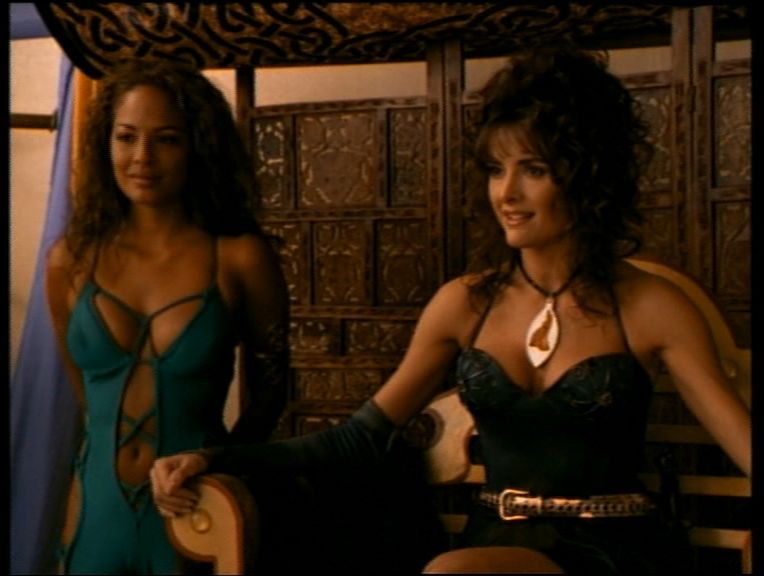 Vorpax and the warriors, it turns out, are subjects of Empress Kreeya (guest star Fabiana Undenio), a woman warrior determined to topple Shao Kahn’s empire. Like Shao Kahn, Kreeya has been amassing her universe realm by realm, growing stronger with each conquest. Now she has her sights set on Outworld–thus the invasion of the Cobalt Mines.

Kreeya has settled on the neutral, and therefore relatively safe, Earth Realm as the place where she will raise her army to defeat Shao Kahn.

Presently, that something arrives at the trading post in the form of Vorpax and two of Kreeya’s warriors. Vorpax invites Kung Lao, Taja and Siro to meet with Kreeya and hear her plans to bring peace to all realms through the destruction of Shao Kahn–the three are even asked to join Kreeya’s armies. Taja and Siro are intrigued by the invitation and meet with Kreeya; Kung Lao is skeptical and stays behind. In an effort to woo Kung Lao, Kreeya shows up at the trading post with Shang Tsung in chains.

Kreeya tells Kung Lao of her people and their quest. She goes on to tell him that her people are a powerful race and when they breed with others, their traits prevail–eventually erasing all traits other than their own. Kreeya proclaims this is all in the name of peace and harmony, however Kung Lao sees it more as the conquering and vanquishing of entire races and realms.

Reluctantly, Kung Lao goes to Kreeya’s compound to learn more of Kreeya and her people. Simultaneously in Outworld, the Shadow Priests have brought Shao Kahn news of Kreeya and her impending attack. Shao Kahn now declares war on Kreeya–even though she is on Earth Realm, which is technically off limits to him. Shao Kahn will deal with the Elder Gods once he’s dealt with Kreeya.

At Kreeya’s encampment, Kung Lao learns much more about Kreeya and her ways than he planned. He discovers a ‘hive’ filled with thousands of incubating female warriors who will grow to adulthood in a matter of weeks–all spawned by Kreeya! When he confronts Kreeya, he and the others are given a choice: join them or perish. When they refuse, they are taken prisoner with Kung Lao being put in the cage where Shang Tsung is being kept. Kreeya, it appears, plans to ‘mate’ with each of them to create new legions of super warriors.

Kung Lao, realizing the desperation of their situation, goads Shang Tsung into a fight. Once Shang Tsung strikes Kung Lao, Rayden appears–the rules of Mortal Kombat have been violated and he can now intervene. Rayden frees Kung Lao and Shang Tsung and, ironically, the mortal enemies must fight together to stop Kreeya and save the Earth Realm from her invasion. The two are successful in destroying Kreeya’s compound and the hive, but disturbingly, when the dust settles, Shang Tsung, Kreeya and Vorpax have all gone missing in the Earth Realm. Back in Outworld, Shao Kahn has discovered that Kreeya deposited thousands and thousands of hives on her visit and his kingdom is about to be attacked by hordes of her warriors. 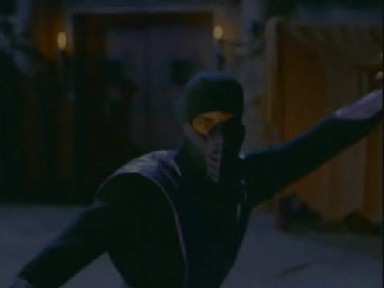 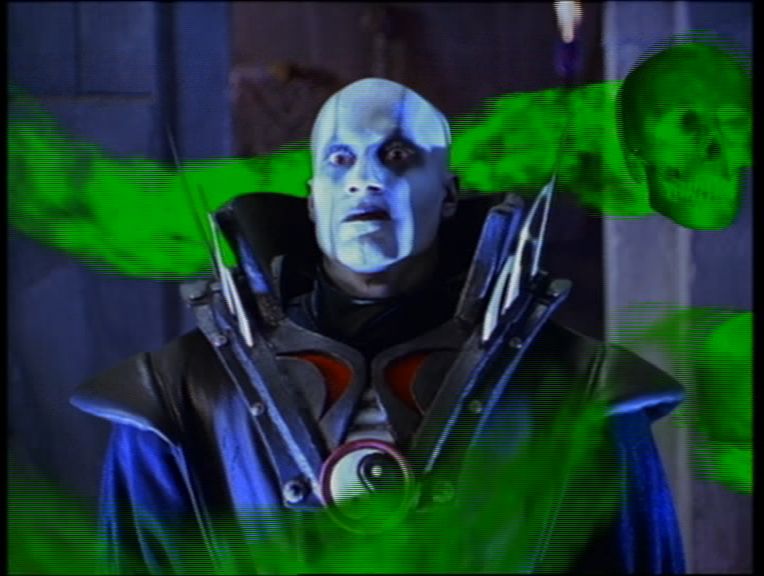 The evil sorcerer Quan Chi casts a spell over Kung Lao, Taja and Siro to lead to their self destruction and downfall.

The evil sorcerer Quan Chi (guest star Adoni Maropis) dispatches a trio of deadly women from the NetherRealm, which he rules, to do away with Kung Lao (series regular Paolo Montalban), Taja (series regular Kristanna Loken) and Siro (series regular Daniel Bernhardt). However, it’s not an ordinary execution Quan Chi has in mind for Kung Lao, Taja and Siro, but a plan by which each would die in shame.

Quan Chi has his three she-warriors, Mika (guest star Jamie Pressly), Siann (guest star Dana Hee) and Sora (guest star Renee Tenison), insinuate themselves into the lives of Taja, Siro and Kung Lao and with a little trickery, each is able to ‘infect’ her intended victim with a potion of Quan Chi’s creation.

The potion that was given to Kung Lao, Taja and Siro masks all of their good qualities and enormously magnifies their shortcomings–Siro becomes an obnoxious drunk, Taja goes back to thievery in a big, big way, and Kung Lao finds that his temper is uncontrollable to the point of violence and paranoia. Unaware that they’ve been the victim of sorcery, Kung Lao, Taja and Siro don’t recognize their own destructive behavior and only see how out of control the other two have become.

At one point, Kung Lao attacks Siro at the trading post and nearly kills him, throwing him out of a second-floor window. During this fight, Rayden (series regular Jeffrey Meek) appears and after seeing the irrational Kung Lao and the near-dead Siro, surmises there’s more at work here than meets the eye.

Rayden then finds Taja just as she’s about to be executed for stealing from the villagers. Among the mob chanting for her death he recognizes Sora and things start to make a little more sense. Rayden corners Sora and makes her tell him what’s going on. Once Sora explains Quan Chi’s spell to Rayden, it’s up to him to convince Kung Lao, Taja and Siro, that only they can break the spell by accepting that life contains both darkness and light and they must choose to live in the light and contain the darkness.

When Quan Chi learns of Sora’s betrayal, he is furious and decides that he’ll take care of Kung Lao himself. Quan Chi’s hope was that Kung Lao would kill an innocent person in a fit of rage. As a warrior, Kung Lao would be disgraced and banned from his temple, sure to die a broken man. Quan Chi would then take Kung Lao’s soul back to the NetherRealm where he would sell it to the highest bidder–most likely Shang Tsung who would use it to win his freedom from Shao Kahn.

Rayden explains this scenario to Kung Lao and warns him that if he is to fight Quan Chi, he must remain focused and not fight in a blind fury. Kung Lao heeds this advice, and when Quan Chi sees that he cannot win the battle he returns to the NetherRealm.

Despite the bruised egos, hurt feelings and broken bones, Kung Lao, Siro and Taja realize what they mean to each other and return to trading post to put their lives back in order.