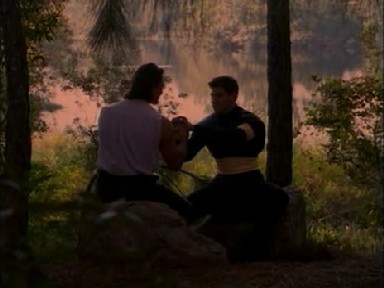 Hannah, it turns out, is now married to Siro’s long-estranged brother, Cassar (guest star Dean Cochran). She has come to Siro because Cassar is missing and she fears that he’s in trouble. Siro, who was dumped by Hannah years ago, is ambivalent toward her plight and tells her she’s on her own.

Meanwhile, Scorpion (guest star Chris Casamassa) reports to Shao Kahn his plans to raise a dark army in the Earth Realm. He’s recruiting only the deadliest fighters to carry out his plans. Unfortunately, Cassar has fallen under the spell of Scorpion and has joined him in his quest.

Cassar and another of Scorpion’s warriors go to the trading post to recruit Hannah to join them. When she resists, a fight breaks out and Cassar escapes, but the other warrior is captured by Kung Lao, Siro and Taja. With a little persuasion and big dagger, Siro and Kung Lao ‘convince’ the captured warrior to tell them where Scorpion is headquartered.

Since they’d be outnumbered by Scorpion’s warriors, Kung Lao and Siro devise a plan to infiltrate his operation and get to Cassar. They decide to send Hannah to Scorpion, pledging her loyalty to the cause as her husband has. Once she gets Cassar alone, Hannah leads him into a trap set by Siro and they take him back to the trading post where they work to ‘deprogram’ him.

Cassar and Siro attempt to sort through years of sibling rivalry which was fueled by their father who always made them compete with one another. Finally, Kung Lao, Taja, Hannah and Siro are able to convince Cassar to stay and join them in their noble quest.

Following a celebratory feast, Siro and Cassar are at the trading post, catching up on the years they’d been separated. Scorpion appears and says he’s come to reclaim what is his, meaning Cassar. For the first time in their lives, the brothers fight alongside each other instead of against each other. Scorpion, seething from Cassar’s betrayal has only one goal–to kill Cassar–and he does, then vanishes into the night.