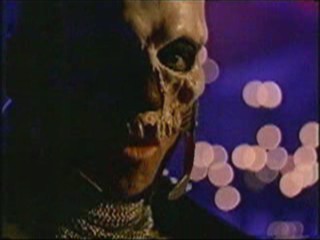 Kung Lao is called upon to protect the Essence of Edenia, the Edenian race’s only hope of ever escaping the treachery of Outworld. It is learned that the Essence of Edenia has been smuggled to the Earth Realm by the warrior Daahraan (guest star Hank Stone). Thought to have been destroyed, the Essence is all the Edenian race has left after their Realm was overrun by Shao Kahn. The Essence provides Edenians with the hope that they may rise again–precisely why Shao Kahn wants to destroy it once and for all. When Princess Kitana (guest star Dara Tomanovich), Kahn’s stepdaughter and herself a vanquished Edenian, hears of the Essence and Daahraan, she and her lifelong friend, Qali (guest star supermodel Roshumba Williams), set forth to retrieve the Essence. Since their intent for the Essence is in direct opposition to Shao Kahn’s, this is literally a life-or-death mission. Shang Tsung (series regular Bruce Locke) also wants to get his hands on the Essence in order to get back into Shao Kahn’s favor. He dispatches Vorpax (series regular Tracy Douglas) to follow Kitana and Qali. Kitana convinces Kung Lao (series regular Paolo Montalban) to go with her to meet Daahraan. When they get to the warrior, they find that he is dying, having been brutally attacked. As Kung Lao tries to help him, he utters his dying words–that Kitana is Shao Kahn’s stepdaughter. Kung Lao is incensed and goes after Kitana, not knowing two important facts about her: She is not an agent of her stepfather’s evil, but an Edenian trying to protect her race, and she is a fierce warrior with special powers including a pair of fans that act as both a shield and a weapon. Once Kung Lao learns of Kitana’s true mission, he agrees to help her by hiding the Essence somewhere in the Earth Realm. A series of double-crosses (some well-intended, some not) leads Qali, Vorpax and Kung Lao to a face-off over the Essence. In the middle of this, Shang Tsung appears (having temporarily left the Cobalt Mines), grabs the pouch containing the essence and escapes back to Outworld with Vorpax close behind. Kitana is despondent when she learns that Shang Tsung made off with the Essence. What she does not know, is that the pouch Shang Tsung has is a decoy and Kung Lao had successfully managed to protect the Essence, thereby preserving the hope of the Edenian people.